It is claimed that the Pavlova was created by chef Bert Sachse while he was working at Perth's Esplanade Hotel. He made it in honour of the hotel's most distinguished guest - the great prima ballerina, Anna Matveena Pavlova. It is now a national dish.

This popular party dessert consists of a shell of meringue filled with whipped cream and fresh fruit.

Have egg whites at room temperature. Add vanilla, cream of tartar and pinch of salt. Beat to soft peaks. Gradually add sugar (approximately 1/8 cup at a time), beating until very stiff peaks form and sugar is dissolved - Meringue will be glossy.

Place on middle rack in oven and bake at 275 F for 1 hour. Turn off heat and let dry in oven (door closed) at least two hours (or leave overnight).

Another Downunder phenomena which is guaranteed to be in every cake shop and at most Ozzie or Kiwi parties. This dessert can be messy to make but it's worth it!

Grease, flour and paper line the base of a baking tray. Cream butter and sugar until light and fluffy. Add eggs one at a time, beating well after each addition. Sift flour and salt. Add alternatively with milk to mixture. Add vanilla. Blend well, but do not over-beat. Add a little more milk if necessary to form a soft dropping consistency.

Bake at 350 F for 25 to 35 minutes, or until toothpick inserted in centre comes out clean. Turn out and cool on a cake rack. Cut into 30 squares. Dip each square in chocolate icing and roll in coconut.

To make icing, melt butter in 1/4 cup boiling water. Sift icing sugar with cocoa and add liquid, mixing well. Add vanilla. The icing must be thin so that squares of cake can be readily coated. Add sufficient boiling water to form this consistency. Dip each square in icing then roll in coconut and leave to dry on a cake rack.

Combine the flour (sifted), oats, coconut and sugar in a bowl.

Melt the butter and Golden Syrup in a saucepan over a low heat.

Mix the bicarbonate of soda with the water and add to the butter and Golden Syrup.

Pour the liquids into the dry ingredients and mix well.

Spoon dollops of mixture, about the size of a walnut shell, onto a greased tin leaving as much space again between dollops to allow for spreading.

Cool on a wire rack and seal in airtight containers.

The American tablespoon is a little smaller than the British/Australian tablespoon, so be generous with your Golden Syrup and Water.

And never, ever call them ANZAC cookies - please retain their original and historic name.

At Goway we believe that a well-informed traveller is a safer traveller. With this in mind, we have compiled an easy to navigate travel information section dedicated to Australia.

Learn about the history and culture of Australia, the must-try a href="/travel-information/australia-south-pacific/australia/food-and-drink/">food and drink, and what to pack in your suitcase. Read about Australia's nature and wildlife, weather and geography, along with 'Country Quickfacts' compiled by our travel experts. Our globetrotting tips, as well as our visa and health information will help ensure you're properly prepared for a safe and enjoyable trip. The only way you could possibly learn more is by embarking on your journey and discovering Australia for yourself. Start exploring...book one of our Australia tours today!

Book your Australia tour with Goway!

With more than 250 Australia tours and experiences, Goway's Downunder wizards can offer you many ways to explore, and enjoy Australia. Choose from a simple city stopover, see the country highlights on one of our classic itineraries, enjoy an Island stay, a self drive holiday, a Holiday of a Lifetime and more. We want to be your first choice when next you go globetrotting. 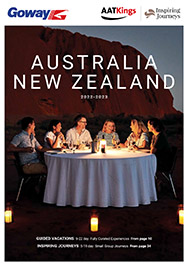