Set sail from Buenos Aires, bound for the remote, isolated and ruggedly beautiful Falkland Islands, a haven for wildlife. See feisty rockhopper penguins to huge populations of black-browed albatrosses, large colonies of elephant and fur seals, dolphins, orcas, and a host of birdlife before disembarking in Ushuaia. 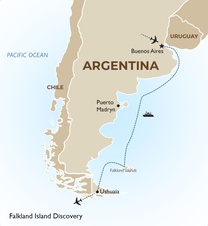 Explore the Falkland Islands on this 10-day cruise from Buenos Aires. Enjoy a night in South America’s most elegant city before embarking, then learn about the complex eco-system and history of the Falklands before visiting for yourself. The cruise disembarks in Ushuaia, the world’s southernmost city and gateway to the Tierra del Fuego.

Consider arriving a few days early in elegant and energetic Buenos Aires to see what Porteno life is all about before boarding your cruise. A couple of days at sea then gives you the chance to get to meet your shipmates, and enjoy presentations from the expedition team on topics including the history of the Falklands, and of course the wildlife you’ve come to see.

The Falklands are widely known for their disputed political past, but five species of penguin also call them home, alongside albatrosses, elephant and fur seals, and offshore mammals such as dolphins and orcas. You’ll also have the chance to visit Port Stanley and the Falkland Islands Museum to learn about the human history of these islands before your onward cruise to Ushuaia.

You’ll disembark in Ushuaia on your final day, but consider booking an extra night or two here. Explore the town’s former prison, now home to four distinct museums that will offer you the perfect snapshot of life at the foot of the world. You can also embark on a day trip into Tierra del Fuego National Park, or visit Emerald Lagoon, but be sure to allow adequate time as these are all day trips.

Buenos Aires is Argentina's elegant, historic and cosmopolitan capital. It is known as the 'Paris of the South' due to its European atmosphere, with glamorous avenues lined with fashionable shops and Parisian-style restaurants and cafes.

On arrival at Buenos Aires Airport, please make your way through to the Arrivals Hall where our representative will be waiting for you to transfer you to your hotel. He/she will be holding a sign with your name on it. Should you not be able to contact them, please refer to the front of your itinerary for emergency contact details of our representative office.

Your cruise itinerary begins with an overnight stay in Buenos Aires. If you arrive into Buenos Aires early enough, the day is yours to explore.

Located on the western shore of the estuary of the Rio de la Plata, Buenos Aires has many fascinating neighbourhoods to wander through including the colorful and lively La Boca, home to art galleries and tango shows. Then there is San Telmo with its restored mansions and antique stores and Recoleta, the city's most exclusive area, home to the famous Recoleta Cemetery.

This morning is free for you to explore Buenos Aires, giving you time to wander the streets of this vibrant city. Transfer to the port of Buenos Aires for embarkation in the late afternoon. You will be welcomed on board the Ocean Endeavour by the Expedition Team and the Ship's Officers.

This evening we set sail from Buenos Aires, allowing you to enjoy your first taste of life at sea and a welcome dinner. The air is likely to be filled with anticipation, as your next view of land will be of Antarctica - the White Continent.

As we cruise from Buenos Aires to the Falkland Islands, there is plenty of time to enjoy the facilities of the Ocean Endeavour, which include a spa, saunas, saltwater pool and gym and relaxing yoga classes. The Expedition Team will make presentations on the wildlife and history of the Falkland Islands, preparing you for what lies ahead. Head out to the spacious decks to try to spot several species of bird that are likely to follow the vessel as it heads southeast, such as albatrosses, storm petrels, shearwaters and diving petrels.

The Falkland Islands, a British Overseas Territory, is an archipelago that lies 490 kilometers east of Patagonia in the South Atlantic Ocean. Surrounded by decades of controversy, the Falkland Islands (or Islas Malvinas as they are known in Argentina) have been settled and claimed by France, Spain, Britain and Argentina.

The Falkland Islands are largely unknown gems that offer an abundance of wildlife - they are a paradise for wildlife enthusiasts and photographers alike. Although often primarily remembered for the Falklands War between the UK and Argentina in 1982, the archipelago is a haven for wildlife. There are 5 species of penguin found here as well as vast populations of black-browed albatrosses, large colonies of elephant and fur seals, Peale's and Commerson's dolphins, orcas and a myriad of bird species.

Our itinerary will be dictated by the weather but we will make daily excursions and shore landings, exploring by Zodiac, hiking and maybe even kayaking. We may visit Carcass Island that abounds with birdlife or Saunders Island, home to the black-browed albatross, breeding imperial shags, and 4 species of penguin (rockhopper, king, Magellanic and gentoo). West Point Island also hosts a large black-browed albatross population and rockhopper penguins.

On Pebble Island there are opportunities to see colonies of 4 species of penguin, king and rock shags, giant petrels, striated caracaras, black-necked swans and ground nesting birds plus an aircraft wreckage from the 1982 conflict. At Grave Cove there are excellent hiking opportunities and a nesting gentoo penguin colony. Volunteer Point is home to the largest king penguin rookery on the Falklands and Sea Lion Island is home to the largest breeding colony of southern elephant seals in the archipelago, with up to 2,000 individuals on the northern beaches. Orcas and Commerson's dolphins can often be seen from the shoreline.

We will visit Port Stanley, the capital of the Falkland Islands, a quaint town with colorful houses, waterfront promenade and English-style pubs. The town was established in the early 1840's and attractions include the Falkland Islands Museum, the governor's house, a cathedral with impressive whalebone arch, a war memorial, quality gift shops and views of shipwrecks in the harbor. Southern giant petrels often fly close to the shore, the endemic Falkland steamer ducks abound on the shorelines while kelp gulls and dolphin gulls can often be seen flying overhead. Other frequent visitors to the Stanley area include black-crowned night herons, red-backed hawks and peregrine falcons. Turkey vultures are regularly seen on top of any prominent building.

After our exploration of the Falkland Islands, you set sail on a course west, bound for the city of Ushuaia, the most southerly city in the world and the capital of Tierra del Fuego (Land of Fire).

We are scheduled to arrive into Ushuaia early this morning, disembarking after a final breakfast aboard the Ocean Endeavour.

Transfer to the airport for your onward flight, or maybe spend a few days in Ushuaia, giving you time to explore the town and the surrounding areas.

OPTIONAL ACTIVITIES
The following activities are available, subject to availability:

KAYAKING - US$790 PER PERSON
Kayaking in the far-flung corners of the world is an
experience guaranteed to refresh your soul. Paddling in
small groups, you’ll glide between ice floes, brash ice and
icebergs dotted with wildlife. Previous kayaking experience
is required.


SNOWSHOEING - US$150 PER PERSON
A unique way to explore Antarctica. It makes walking up
gentle slopes a breeze, allowing you to explore places
others struggle to reach in boots alone.

CAMPING - US$290 PER PERSON
A true outdoor adventure, experience the sights and
sounds during your opportunity to fully immerse yourself
when you camp overnight in Antarctica.

PHOTOGRAPHY PRIVATE WORKSHOP - US$790 PER  PERSON
Includes workshops prior to arrival in Antarctica, critiquing
sessions while in Antarctica and editing workshops on
the return journey. Some zodiac excursions on dedicated
zodiac and dedicated to Photography guide on landings.
Return with the best capture memories possible.

HIKING - NO COST
Explore the surroundings by foot as you actively hike on
Antarctica. Only available in some locations. Weather
dependant.

YOGA - NO COST
Experience Yoga in a way like no other. On board the ship
you will find yoga available to you. This is however, weather
and swell dependent. 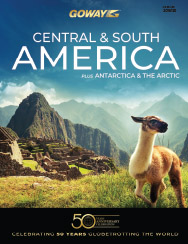