Discover the southern coastal cities of Italy on this small group tour from Rome. Stay in first-class accommodations and discover the rugged coastline as you journey to cities, small villages and UNECSO-listed old towns such as Naples, Sorrento, Positano, Alberobello, and Ostuni. 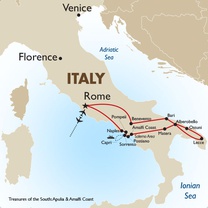 This 6-day Italian vacation takes you along the beautiful Amalfi Coast and the heel of Italy’s boat, beginning and ending in Rome. It features first-class accommodations, shared tours aboard an air-conditioned bus, and is a great add-on to a stay in Rome and Northern Italy.

Your journey begins in Rome, where you’ll meet your tour guide and depart south to Naples, one of Italy’s most iconic cities, where you’ll head to a local pizza restaurant to dine on pizza in the city that invented it. Continue to the Roman city of Pompeii, which was buried in volcanic ash for almost 2,000 years, and see the well-preserved remnants of this ancient empire, before reaching picturesque Sorrento, with its pastel homes along the stunning waters of the Gulf of Naples. The next day, sail the hydrofoil to the beautiful island of Capri and cruise the famous Blue Grotto.

Back on the mainland, you’ll continue through the Amalfi region, stopping off at the two lovely towns of Positano and Amalfi on the way to Salerno. The next day, head on a guided tour of Matera, the UNESCO-listed centre known as the City of Stones, before reaching Alberobello, where you’ll taste some local olive oils from the Puglia region and admire the town’s famous dry-stone huts known as trulli. Based in Alberobello, you’ll head to nearby Lecce for a guided tour of the Baroque town centre, before continuing to Ostuni, known as the White City due to the old town centre being entirely whitewashed.

On the final day of your journey through Southern Italy, you’ll explore the old town centre of Bari and learn about the creation of Strega liquor at a factory in Benevento before returning to Rome, where your vacation ends.

Today, you have an early departure from Rome where you will travel in a comfortable air-conditioned bus, accompanied by a multilingual tour leader. Upon arrival in Naples, walk around the city centre, discovering Piazza del Plebisicito, Palazzo Reale, Galleria Umberto I and Teatro San Carlo. Enjoy lunch in a local restaurant to taste authentic Neapolitan pizza. Proceed to Pompeii for the guided tour of the archaeological excavations. This ancient Roman city was destroyed when Vesuvius erupted in 79 AD and buried it, preserving it under a sea of volcanic ash for nearly 1700 years. Enjoy a stop in a cameos and coral shop. Transfer to Sorrento, famous for its picturesque old town centre and characteristic fisherman's village of Marina Grande, one of the most authentic treasures of the city. Tonight, enjoy dinner and overnight in Sorrento for 2 nights.

After breakfast, depart for the port of Sorrento. Meet the guide and sail to Capri by hydrofoil. After arriving at the island, enjoy a boat trip to the Blue Grotto (weather permitting). Continue by minibus to Anacapri and have lunch at a local restaurant. Then reach the legendary Piazzetta, heart of the island. Return to the port to head back to Sorrento. Tonight, enjoy dinner in Sorrento.

Enjoy breakfast then Transfer from Sorrento to Salerno area with en route stop in Positano and Amalfi and time at leisure to discover these two pearls of the Amalfi Coast. Enjoy dinner and overnight in Salerno for 1 night.

Breakfast in the hotel and departure for Matera. Guided tour of the City of Stones, a UNESCO World Heritage Site. In the early afternoon, proceed to Alberobello and taste the local olive oil from Puglia in the stunning village, known throughout the world for its famous 'trulli' (dry stone huts). Enjoy the evening at your leisure and overnight in Alberobello for 2 nights.

Breakfast in the hotel and departure for a trip to Lecce and Ostuni. First stop in beautiful Lecce, with a guided tour to discover the pearl of Puglia's baroque architecture. Proceed to Ostuni, also known as the White City because of its characteristic old town centre, once completely whitewashed. Upon arrival, a ride in an Ape Calessino, a typical three wheel vehicle.

After breakfast, depart for Bari. Time at leisure to explore the old city, hidden within ancient walls and tasting of typical products. Proceed to Benevento, stop at the factory where the famous Strega liqueur is produced. Departure for Rome and arrival in the late afternoon.