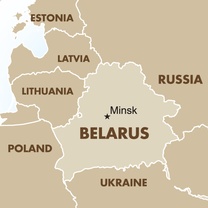 Belarus geographically shares borders with Russia, Ukraine, Poland, Lithuania and Latvia. The country declared its independence from the Soviet Union in 1991. Comparatively flat, 40% of its landmass is covered in forest. It is a country with a long history as is to be discovered in many of its old buildings including churches, castles and even urban dwellings while on a Belarus vacation.

The capital, Minsk, offers many of these together with a collection of interesting art galleries and museums plus a main boulevard measuring 15 kilometres/9 miles in length. The oldest part of the city is called Trinity Square and is Minsk’s gem attraction.

Other places of interest on a Belarus vacation include Polotz, the oldest city in Belarus and is very interesting architecturally as it has many historical buildings. One is the ornate medieval 11th Century Cathedral of St. Sophia.

Brest is a city closely linked to the history of Central and Eastern Europe and the ever-changing borders. One aspect of the city that shows this is its architecture, with parts of Brest quite Polish in character. There are also beautiful orthodox churches as well as some very prime examples of Soviet building styles. One building of note is the Brest Fortress dating back to the 19th Century with its museum depicting the battles between the Soviets and the Nazis.

Vitebsk is the cultural capital of thbe country on a Belarus vacation and is the birthplace of the painter, Marc Chagall. His former home is available for visits and there is an art gallery devoted to him. Annually, Vitebsk holds a huge music festival called the Slaviansky Bazaar.

Some other notable venues are Nesvizh Palace, the country’s most beautiful castle with its surrounding moat and gardens, Mir Castle in the Grodno region, an imposing 16th Century fortress, the Mount of Glory is a monument built in honour of the Red Army’s casualties during WWII and the Khatyn Memorial, a haunting place showcasing the same purpose. Lida Castle, erected in the14th century, serves now as a venue for history festivals. Every year the festival of medieval culture is held here, as well as knight tournaments that gather participants not only from Belarus but other European countries.

Consider an additional stopover to your Belarus vacation at one of Goway's other European destinations. You can choose from  a Paris vacation, a London vacation or an Amsterdam vacation. This can be done stopping over en route to or from Belarus.