A Brief History of Goway

Goway Travel was created in Toronto in 1970 by Bruce Hodge. Prior to arriving in Canada, Bruce was a research economist with the Reserve Bank of Australia; then worked in England as a tour guide and subsequently became operations and sales manager for a London based European tour operation.

Goway specialized in fun holidays for the "under 30's" as well as overland adventure tours through Africa and Asia. This was augmented by the introduction of mini-bus tours of North America and an eight year period of operating coach tours through South America (including during the Falkland war). Goway divested its interests in AmeriCan Adventures (the mini-bus venture) in the early 90's! 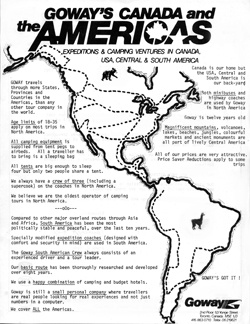 The Eighties and Nineties

Along the way, as a result of connections "Downunder" (Australia and the South Pacific), Goway evolved into North America's largest specialist travel companies for the South Pacific. From modest beginnings, Goway now represents all the leading tour operators in Australia, New Zealand, Fiji, Tahiti and the Cook Islands.

Today we are still the only North American travel company that fully owns its own office in Australia. Goway Sydney was set up to maintain price controls and to offer additional service to travellers Downunder - a terrific help to Goway passengers during an airline strike several years ago, an airline failure and problems caused by September 11th.

Today Goway has sales and reservations offices in Toronto, Vancouver and Los Angeles.

With the South Pacific covered, in the mid 1980's Goway developed a similar product line in Asia. Today Goway has programs to China, India and over 20 other countries throughout the region.

"Over the years we honed our skills at being very proficient in designing personalized customized itineraries for independent Globetrotters."

In the mid 90's, Goway introduced a full line of products for Southern, Eastern and Northern Africa to cater to the ongoing interests of our past travellers. (Bruce's wife also comes from South Africa!). Branded AFRICAExperts this division proudly lives up to its name. They are also experts for travel to the Middle East.

The movie "Crocodile Dundee" and the Sydney Olympics in 2000 enhanced Goway's stakes as the North American leader for travel to Downunder. Unfortunately September 11th devistated our industry for a period in the early 2000's.

In 2005 Goway purchased the specialist Adventure company AdventuresIncorporated to maintain a focus on the world of adventure. Following the same mandate as other Goway specialist divisions the adventure team offers past, present and future Goway Globetrotters an exciting range of travel ideas.

To enhance our ability to appeal to past clients we continue to develop new destinations as we did in 2010 for Latin America with travel ideas to most countries in South and Central America.

In 2015 yet another product line was launched to cater to past clients... UK-Europe and The Mediterranean.

Over the years we honed our skills at being very proficient in designing personalized customized itineraries for independent Globetrotters. At the same time we developed exclusive top class small group escorted touring experiences to our main destinations called HOLIDAYS OF A LIFETIME. They carry Goway's promise "of something special".

Today Goway wants to be the globetrotters first choice

The strength of Goway has always been our staff and our commitment to customer satisfaction. Many of our staff are longtime employees and Bruce Hodge continues to be president, while his son Adam and daughter Bronwyn are also actively involved.

"Goway has always been a leader in the travel industry".

As we are very optimistic about the future of "long haul" travel, expect more innovative ideas from us!