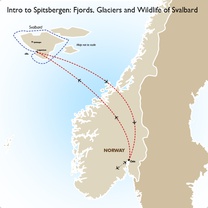 The Royal Kingdom of Norway is a part of Scandinavia bordering Sweden to the east and Finland and Russia to the north-east. It is a sparsely populated country (5 million people) but offers some of the most stunning and dramatic scenery anywhere. In particular, the south-west coast is the most visually impressive coastline in the world. Geographically, it is very varied from its renowned fjords, its mountainous interior and its arctic landscapes in the far north to its gentle southern coastline and farmlands in the south, all to be experienced on your Norway vacation.

What are the top cities and places to visit in Norway?

Norway’s capital Oslo, located in the south-east corner of Norway, is the third largest city in Scandinavia. It  has many attractions and offers several pleasant parks, a scenic harbour and diverse architecture. Vigeland Park is the world's largest sculpture park made by a single artist. This open-air sculpture park is where you can see, on a Norway vacation, 212 sculptures made of bronze and granite. One of the park's more popular statues is the eye-catching Angry Boy. The Children’s Playground has a collection of eight bronze statues showing children at play. The Viking Ship Museum contains the world’s best–preserved Viking ships plus other archaeological finds such as small boats, toboggans, tools, textiles and household utensils from the same era. The museum is most famous for the completely whole Oseberg ship which was discovered in a large burial mound at a Norwegian farm. This ship is commonly acknowledged to be among the finer artifacts to have survived from the Viking Era.

Bergen, Norway’s second-largest city has been described as a large city with a small-town charm. It is not only a centre in itself but is also the most popular gateway to the Norwegian fjords as it is halfway between the Hardangerfjord and the Sognefjord. The city is surrounded by seven mountains and this backdrop adds to the beauty of being on the North Sea coast. The neighbourhood of Bryggen is a series of Hanseatic commercial buildings lining the eastern side of the harbour with old houses museums, shops, restaurants and pubs. There are several attractions in the area, from the Fish Market to Bergenhus Fortress. Troldhaugen was the home of Norway’s most famous composer Edvard Grieg for 22 years.He composed many of his best-known works in the little garden hut here. A museum building has been added with a permanent exhibition of Edvard Grieg's life and music as well as a shop and restaurant. On trips to Norway, Lunchtime concerts take place every day from May to September. Evening concerts are available every Sunday from mid-June to early September.

On a Norwegian vacation, there are more than one thousand fjords to visit which are found along the Norwegian coastline. A fjord is a long, deep, narrow body of water that heads from the sea, inland, usually with very steep towering walls of rock on both sides. The Norwegian fjords are nothing less than spectacular. Some of the major fjords include the following. The Sognefjord is Norway’s longest and deepest fjord. It has an arm called the Naeroyfjord, listed as a UNESCO World Heritage site and where you will find the highest mountains in Norway. The Hardangerfjord is the world’s 4th largest fjord and the second longest in Norway, stretching 179 kilometres/111 miles. The Geirangerfjord is surrounded by snow-covered mountain peaks and lush, green vegetation. Stretching for 15 kilometres/9.3 miles, it is recognized as a UNESCO World Heritage Site. It is surrounded by some of the steepest mountains on the west coast of Norway. The sides rise practically vertically out of the fjord. Dramatically beautiful waterfalls plunge down into the fjord.

What type of Experiences can I enjoy in Norway?

The Flam Railway is one of the world's most spectacular train journeys providing panoramic views of some of the most majestic scenery in the fjords on a Norway vacation. It is also one of the world's steepest railway lines. The journey passes by amazing mountain landscapes, gushing waterfalls and goes through 20 tunnels. The train takes you from sea level in the village of Flam to the Myrdal mountain station at 870 metres/2745 feet. You will pass through wild and beautiful mountain scenery with waterfalls and steep mountainsides. You will, on an organized tour, embark on a cruise on the Sognefjord, the world’s longest and deepest fjord, to Balestrand.

The train Journey between Oslo and Bergen has to be one of the world’s most beautiful rail journeys as well as one of the highest stretches of rail track. It takes just over 6 hours for a distance of some 485 kilometres/300 miles and provides the opportunity to see some of Norway’s best scenery. From Oslo, after passing through the forests of southern Norway, it climbs up onto the Hardangervidda Plateau. Then it continues down through the pretty country around Voss and on to Bergen. En route it comes within touching distance of the fjords.

One way to experience Norway’s natural beauty is to take a coastal cruise along the west coast You can join cruises  taking you from Bergen to Trondheim in the far north of Norway and experience the striking landscape of this Nordic country. You will enjoy nor only the fjords but also charming ports of call such as Tromso and Kirkenes in the Arctic Circle as well as the Midnight Sun.

The midnight sun is a natural phenomenon that occurs in the summer months in places north of the Arctic when the sun remains visible at midnight. Around the summer solstice, which is approximately 21 June in the Northern Hemisphere, the sun is visible for the full 24 hours if the weather is favourable. In Svalbard, Norway, the northernmost inhabited region in Europe, there is no sunset from approximately 19 April to 23 August. The further north you go, the more nights of midnight sun you experience. Some of the best places to enjoy this phenomenon are Bode, Svalbard and Tromso.

Also known as the Aurora Borealis, this phenomenon is bright dancing lights which are actually collisions between electrically-charged particles from the sun that enter the earth's atmosphere. Northern Norway during the polar night is the best bet for experiencing the Northern lights which occur at roughly 27-day intervals, the time it takes the sun to rotate once. October, February and March are the best months for seeing them and you need a dark, clear night. On trips to Norway, they are visible from late September to March anywhere from 6 pm to 6 am. Some of the places to view the Northern Lights are Kirkenes, the Lofoten Islands, Tromso, Hammerfest and Svalbard.

Scandinavia: A Comprehensive Selection of Travel Ideas for Your Northern Europe Vacation

Ten Iconic Sites to See on a Europe Vacation

Fantastic Train Travel Can Be Part of a Goway Tour

Free Things to See and Do on European Vacation Packages

10 Magnificent Churches to See on a European Vacation

Consider an additional stopover to your Norway vacation at one of Goway's other European destinations. You can choose from a Paris vacation, a London vacation or an Amsterdam vacation. This can be done stopping over en route to or from Norway.