FIRST-CLASS | TAILOR-MADE: Get to know both of New Zealand’s islands by taking in some of their most popular sites. Travel from Auckland to Christchurch, visiting Rotorua, Queenstown and Milford Sound in between. Visit the rainforest and black sand beaches outside of Auckland, experience the Maori culture in Rotorua, cruise magnificent Milford Sound with its rugged mountain peaks and cascading waterfalls, pass through the beautiful landscape of Otago before arriving to Christchurch.

Essence of New Zealand | Exclusive Offer Book by 31Jul21 and receive a Signature Mud Wrap and admission to the pool at the Polynesian Spa in Rotorua! View Special 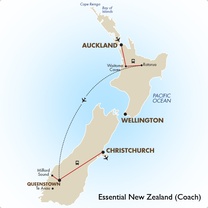 Combining the best of north and south, this 9 day trip is the perfect introduction to picturesque New Zealand.

New Zealand’s largest city, Auckland seduces visitors with its laid back pace, world class museums, galleries and gardens. Enjoy spectacular city views from your included visit to Mt Eden, as well as historic Parnell Village. You’ll also explore some of the surrounding rainforest, including the black sand beach where ‘The Piano’ was filmed.

The North Island of New Zealand is a geology geek’s paradise. Believed to be over two million years old, the Waitomo Caves are a major draw for visitors fascinated by their large population of glowworms and beautiful stalactite and stalagmite formations. You’ll have the chance to explore them on your way to Rotorua, where spouting geysers and boiling mudpools showcase geothermal New Zealand at its best. An included tour of this area includes Rainbow Springs, Te Whakarewarewa thermal reserve and Te Puia Rotorua. Cap off your sightseeing with a traditional Maori concert and Hangi (feast) for a taste of New Zealand’s indigenous culture.

A Mecca for skiers, Queenstown puts you in the heart of the South Island’s mountain landscape. Less active travelers can enjoy an optional scenic helicopter flight, jetboat trip or Gondola ride to take in the sights. An included day trip takes you to Milford Sound, a breathtaking, 16km long fjord carved by glaciers out to the Tasman Sea. Your onward journey to Christchurch also passes Lake Wanaka and includes a stop at majestic Mount Cook, known to the Maori people as ‘Cloud Piercer’.

Christchurch was devastated by four large earthquakes between September 2010 and December 2011. But while some areas and attractions remain closed for repairs, there is still plenty for the visitor to do and see if time allows. The Air Force Museum will thrill military history buffs, while the Canterbury Museum provides a fascinating look at New Zealand history. Or take a tour of sites affected by the quakes for a glimpse of a resilient, rebuilding Christchurch.

Inquire About this Trip! View Itinerary View Accommodation
At Goway we are experts at designing personalized itineraries to suit your special interests, tastes and budget. Let us arrange your ultimate travel experience today.

On arrival at Auckland Airport, transfer to your Auckland Hotel.

The balance of the day is at leisure to begin your exploration of the City of Sails.

Best of Both Worlds

Experience the best sights of Auckland City in the morning combined with an afternoon Wilderness Experience -- a day of contrasts. Auckland is set on 52 dormant volcanic cones and between two harbours, the sparkling Waitemata and the brooding Manukau. Known as the City of Sails, it's New Zealand's largest and busiest city. The morning tour is a journey of discovery designed to explore the history and sights as well as see how Aucklanders live and play.

A 30 minute drive from downtown Auckland brings you to the Arataki Centre, the gateway to the rain forest, where the sweeping decks give breathtaking panoramic views from the Tasman Sea to the Pacific Ocean. Absorb the local history and admire the traditional Maori carvings that stand guard there. Head further west and experience the power of the wild and rugged west coast. Feel the black sand beneath your feet as you stroll along some of the most awe-inspiring beaches the world has to offer.

With your knowledgeable and experienced guide, your eco-tour continues on to the lush rain forest where you hear native birdsong as you walk the easy bush tracks amongst New Zealand's famous kauri trees and giant tree ferns.

Auckland to Rotorua via Hobbiton

Travel south from Auckland over the Bombay Hills to the rich farmland of the Waikato region. You travel through the heritage town of Cambridge where tree-lined streets add to the English-style atmosphere. From here your journey takes you through undulating green hills reminding you that you are approaching Hobbiton Shire.

On arrival at Shire's Rest you embark on your Hobbiton movie set tour. This location is the largest "green set" in the world and the only place where you get an emotional response to a movie set in a natural setting. You see 44 hobbit holes, the Mill and double arch bridge and the party tree. At this stunning location you can take a photo at the door of Bilbo's house, "Bag End", looking out over the whole set to the hills in the distance. The tour ends with a visit to the Green Dragon Inn for a drink. After the tour at Hobbiton board the shuttle at Shire's Rest Cafe for your journey to Rotorua.

Today on your morning tour you will visit Te Puia and the Maori Arts and Crafts Institute where you can view mighty geysers, boiling mud pools, and the traditional arts and culture of the Maori People. You will also experience Rainbow Springs which is a unique showcase of New Zealand's flora and fauna including New Zealand's national icon, a kiwi bird. Last but not least, you will have a hands on experience at the Agrodome Sheep Show, giving you an animated insight into New Zealand's farming history.

This evening you will engage in a wonderful experience at the Tamaki Maori Village. Enroute your guide will instruct you on the rules and protocol for visiting Marae (meeting grounds). On arrival at the venue, nobody must enter the fortified village until the Powhiri (formal welcome) has been performed. The host tribe will send out a toa (warrior) who will challenge the guests, via their elected chief to ascertain if they come in peace. A Teka (peace offering) is placed and received by one of the visiting chiefs. At the Village, the Karanga, or "welcome call" will echo across the courtyard, followed by the Powhiri (welcome dance). You will then be able to enter onto the village grounds where the Tangata Whenua (people of the land) will demonstrate different activities such as poi twirling, hand games, weaponry displays, reciting chants and displaying activities of an era gone by.

The buffet style dinner will be held in the meetinghouse dining hall and will have everyone enjoying a succulent Hangi feast. The evening ends with the Poroporoaki, the official closing ceremony and you will be safely transferred back to your accommodation.

This morning, transfer to the Rotorua airport for the flight to Queenstown on New Zealand's South Island. (Flight not included in price).

On arrival at Queenstown, you will be transferred to your hotel.

The balance of the day is at leisure.

Following a transfer to the Queenstown airport, board an aircraft for the flight to Milford Sound. During the 35 minute scenic flight, take in expansive views of golden tussocked high country and the upper reaches of Lake Wakatipu and fly over the snow-capped Southern Alps. A hidden landscape unfolds below revealing glacial lakes, waterfalls, densely forested valleys and cloud-piercing summits.

On reaching Milford Sound join an extended and leisurely cruise of Milford Sound to the Tasman Sea. Nature cruises have a relaxed and flexible itinerary designed to allow guests to see and experience what makes Milford Sound world renowned. Spend up to two and a half hours nudging into waterfalls, spotting wildlife and listening to the informative commentary from a specialist Nature Guide who mingles with guests. Keep a look out for wildlife including seals, dolphins and penguins. A picnic lunch is included and complimentary tea and coffee is available.

Following the cruise, guests are transferred to the Milford airport for the scenic flight back to Queenstown. Return taxi transfers are provided to accommodation on arrival at Queenstown airport.

Depart Queenstown and travel through the rugged and beautiful landscape of Otago. Cross the Lindis Pass into the Mackenzie Country to visit Mount Cook Village at the base of New Zealand's highest mountain Aoraki / Mount Cook. Here there is time to experience an optional scenic helicopter or skiplane flight with a snow landing (weather permitting). Continue your journey with a stop at the Church of the Good Shepherd on the shores of Lake Tekapo, before continuing to your destination of Christchurch.

Today, you will be transferred to the Christchurch Airport for your onward flight.

Daily from Auckland and Christchurch. 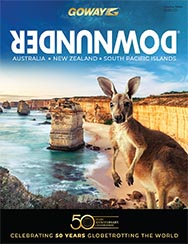