Japan is a volcanic archipelago consisting of 6,852 islands. The four largest are Honshu, Hokkaido, Kyushu, and Shikoku which make up about 97% of Japan's land area.

When visiting Japan, often called the “Land of the Rising Sun”, the first thing that will strike you will be the intertwining of the traditional and the modern which is the very essence of Japanese culture and possibly one of its principal attractions. Long lasting traditions pervade all aspects of life here and will fascinate the visitor. Contemporary high rise buildings contrast with an abundance of serene temples and shrines. The many beautiful ornamental gardens and ancient castles will bring to life a different era on a Japanese vacation.

On a contemporary note, high speed bullet trains will transport you from city to city through interesting and scenic countryside and on arrival, you will be able to immerse yourself in a traditional culture through perhaps attending an age old tea ceremony or attending a performance of Kabuki, Japan’s ancient form of drama.

What are some must-do experiences in Japan?

Consider your dates of arrival on Japan tours. Nature has also blessed Japan through cherry blossoms in the Spring and a startling array of colours in the Fall.

Garden design is an important Japanese art form that has been refined for more than 1000 years and in Japan, gardens have evolved into a variety of styles with different purposes. Great gardens can be found throughout Japan, in particular, in the former capital, Kyoto.

Throughout the year, you can readily find local festivals on a Japan vacation which take place all over the country ranging from celebrating the cherry blossoms to listening to jazz. An important element of Japanese festivals is processions, in which the local shrine's kami (Shinto deity) is carried through the town in mikoshi (palanquins).

If you really want to immerse yourself in Japanese culture, consider taking a dip in a hot spring known as an Onsan. Natural hot springs are numerous and highly popular across Japan. Every region of the country has its share of hot springs and resort towns, which come with them. Consider a stay at a traditional Japanese Inn called a Ryokan for a true Japanese experience. Or perhaps attend a sporting event such as Sumo wrestling or a baseball game, two strong passions of the Japanese.

Traditional Japanese arts include crafts such as ceramics, textiles, lacquerware, swords and dolls, the tea ceremony, martial arts, calligraphy, origami, onsen and Geisha. And then there is the cuisine – totally distinctive and you don’t have to drink tea made from seaweed but you might be curious enough just to try it once on Japan tours.

Where should I visit when I go to Japan?

Tokyo would be the obvious starting point of a visit to Japan with its visions of the future situated side by side with glimpses of old Japan.  To obtain an idea of the size of the city, head to any one of the three building’s viewing platforms affording amazing panoramic views – the Tokyo Tower, the Tokyo Metropolitan Government Building and the World Trade Centre. The Imperial Palace is not open to the public but the beautiful and landscaped Imperial East Gardens are. Another highlight is the Tsukiji Fish Market, one of the world’s largest fish markets and a major tourist attraction. The Asakusa district offers the Ancient Buddhist shrine, the Sensoji Temple dating back to the 7th Century plus a street market filled with stalls. For museum fans, there are a number of museums in Ueno Park including, the Tokyo National Museum, the oldest and largest in Japan, the Tokyo Metropolitan Museum of Art, the National Museum of Western Art  and the National Science Museum. The park also houses several shrines and a zoo. Other interesting shrines in Tokyo are the Meiji Shrine, the best known one and the Yasakuni Shrine which commemorates Japan’s war dead. For upscale shopping, dining and entertainment, visit the Ginza district. For regular shopping, try Shibuya (department stores), Akihabara (electronic goods) or Shinjuku (quirky boutiques).

Kyoto, the ancient capital from 794 AD to 1868 AD, is more like an open air museum contained within a city on a Japanese vacation. It is a treasure trove of shrines, pavillions, castles, ornamental gardens and atmospheric neighbourhoods. The Higashiyama District is a good example of the latter with its narrow laneways, wooden buildings and traditional merchant shops. The Gion District is synonymous with Geishas who can be seen heading from one assignation to another. It also has a number of wooden merchant houses plus shops, restaurants and teahouses. There are so many beautiful historical sited that it would take quite some to see all of them. Some of the principal ones include the Kyoto Imperial Palace used until 1868, Nijo Castle, an excellent example of a palace from the feudal period, Kinkakuji Temple (the Golden Pavillion) with its mirror image reflected in a lake, Ginkakuji Temple (the Silver Pavillion), a beautiful Zen temple with exquisite gardens, Nansenji Temple, one of the most important Zen temples in Japan and the Heian Shrine with its giant impressive gate and spacious grounds. For museum buffs, the Kyoto National Museum offers a variety of wide ranging exhibits and should not be missed on Japan tours.

Nearby is the city of Nara, Japan’s capital from 710 AD to 784 AD, home to many scenic and historical sites and a large number of buildings designated as national treasures. Most of these are situated in Nara Park, an expansive green space where tame deer roam freely. The major attraction in the park is the Todaiji Temple, the second largest Buddhist temple in Japan and one of the largest in the world. The main hall, the Daibutsuden (Big Buddha Hall) is the world's largest wooden building. For certain, Nara will not disappoint the visitor with its calm, serene atmosphere.

Similar to Nara is Nikko, not too far from Tokyo. Unlike Nara, it offers a variety of temples and shrines that are more ornate with multicoloured carvings and gold leaf. There is also a magnificent forest with over 13,000 cedar trees. The main temples here are Toshugu, the most extravagant, Rinnoji, the most peaceful and Futarasan, the oldest. Also worth seeing on a Japan vacation are the mausoleums of ancient Shoguns.

What are some unique Japanese experiences?

Something a little different on Japan tours would be a visit to Hakone Spa and nearby Mount Fuji. Hakone, in a national park, is a mountainous region known for its hot springs resorts and Mt. Fuji views. Attractions are Lake Ashi which can be toured by boat, the boiling sulphur springs of Owakudani Valley, the Hakone Ropeway cable car and Hakone Open Air Museum with its displays of a wide variety of sculptures and artwork within a beautiful parkland setting.

Hiroshima became known worldwide when the first atomic bomb was dropped on the city in 1945. It obliterated nearly everything. Great efforts were taken to rebuild the city, including destroyed monuments of Hiroshima's historical heritage such as Hiroshima Castle and Shukkeien Garden. In the centre of the city, a large park was built and given a name that would reflect the aspirations of the re-born city: Peace Memorial Park. A visit here on a Japanese vacation will be rewarding.

Sapporo is Japan’s fourth largest city and the capital of Hokkaido Island. It was host to the 1972 Winter Olympics and is a city of numerous attractive parks. It is also the site of the Sapporo Snow Festival featuring spectacular snow and ice sculptures and attracting more than two million visitors from across the world. Two highlights here are the Sapporo Clock Tower which serves as a museum with displays about Sapporo and the building's history and the Historic Village of Hokkaido, an open air museum with exhibits of 60 typical buildings from all over Hokkaido dating from 1868 to 1926.

The Okinawa Islands consist of 49 inhabited islands and 111 uninhabited islands. The main island of Okinawa has a subtropical/tropical climate and is one of the major tourist destinations for the Japanese plus overseas visitors. Most people come to Okinawa for the sun and beaches on Japan tours.

Off the beaten track but still well worth visiting are places such as Takayama, a city in the mountainous Hida region of Gifu Prefecture with its beautifully preserved old town. The Takayama Festival, held in spring and fall, is considered one of Japan's best festivals. Kanazawa, in central Japan, is known for its well-preserved Edo Period districts, art museums and regional handicrafts. Kenrokuen Garden, begun in the 17th century, is celebrated for its classic landscape designs incorporating ponds and streams. Kamakura, not far from Tokyo is known mainly for its Great Buddha of Kamakura, a bronze statue which stands on the grounds of Kotokuin Temple, the second tallest bronze Buddha statue in Japan.

Wherever you travel in Japan, you will never unearth all the treasures there. Just imagine suddenly seeing a Geisha flitting across the street in Kyoto or catching a glimpse of the uniquely shaped snow-capped Mount Fuji as you hurtle by it on a bullet train. Book one of our Japan tours today and start unearthing the treasures.

Sapporo to Sake and Beyond: Drinks Enjoyed on Japan Tours

Things To Do in Tokyo on Your Japan Vacation

Four Perfect Days in Tokyo on a Japan Vacation

Experience the Sights and Seasons of Japan

Five Lesser-Known Highlights to Experience on a Japan Vacation

At Goway we believe that a well-informed traveller is a safer traveller. With this in mind, we have compiled an easy to navigate travel information section dedicated to Japan tours.

Learn about the history and culture of Japan, the must-try food and drink, and what to pack in your suitcase. Read about Japan's nature and wildlife, weather and geography, along with 'Country Quickfacts' compiled by our travel experts. Our globetrotting tips, as well as our visa and health information will help ensure you're properly prepared for a safe and enjoyable trip. The only way you could possibly learn more is by embarking on your journey and discovering Japan for yourself. Start exploring… book one of our Japan tours today!

FIRST-CLASS | PRIVATE-GUIDED: Delve into Zen Buddhism and meditation on this journey to Japan. Venturing your way through the country, you’ll visit Buddhist temples and learn about Zen traditions in Kyoto, stay in a mountaintop monastery on Mt. Koya, soak in mountain views in Hakone, and finally delve into the food and culture of Tokyo. 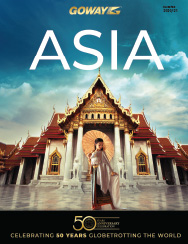