Reykjavik and the Golden Circle

Discover trendy Reykjavik and the beautiful scenery of the Golden Circle and South Iceland on this introductory tour of Iceland. Based in Reykjavik, you’ll experience a taste of the city’s culinary scene before exploring Solheimajokull, the Golden Circle, and the subterranean chambers of Thrihnukagigur Volcano. 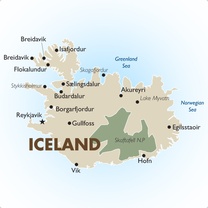 This 5-day Icelandic vacation takes you to Reykjavik as well as several of Iceland’s most popular landmarks, including the Golden Circle. It features first-class accommodations, a mix of shared and private tours, private transfers, and is a great introduction to Iceland.

Your journey begins in Reykjavik, Europe’s most northerly capital and the home to a third of Iceland’s population. Although Reykjavik is small and largely walkable in the downtown, it still has a cosmopolitan vibe that feels more akin to a city of two million, not one under 200,000. You’ll get a taste for its cultural power with a unique dining experience in the heart of the old town at the Fish Company, located inside the old Zimsen House not far from the waterfront. Feast on an assortment of fine Icelandic cuisine including an abundance of fresh seafood and enjoy a taste of Reykjavik’s celebrated culinary scene.

While based in Reykjavik, you’ll head on a series of day trips to explore some of the most popular sights in the country, all accessible by road from the capital. On your first day, journey along the Ring Road to the south shore where you’ll stop off at beautiful waterfalls such as Seljalandsfoss and Skogafoss. You’ll then journey to the foot of Solheimajokull and head on a glacier walk across the icy landscape to discover a stunning assortment of ridges and crevasses. The next day, explore the Golden Circle, the most popular collection of attractions in the country. Venture northeast of Reykjavik to reach Thingvellir National Park, where the Eurasian and North American tectonic plates create a series of stunning rocky gorges. Then head to Haukadalur, where you’ll see the exploding geyser of Strokkur as well as Geysir, which gave these water spouts their name. End at Gullfoss, the Golden Waterfall, with its impressive volume of water coursing down a wide river.

On your final full day, venture inside the volcano at Thrihnukagigur in the Blafjoll Mountains and journey through an underground world of magma chambers and lava tubes in the heart of the dormant volcano. Back in Reykjavik, toast your journey with a farewell dinner pairing local beers with an assortment of Icelandic delicacies, including lamb and fresh fish. At the end of your stay, head back along the highway to Keflavik International Airport, stopping off at the Blue Lagoon for a dip in its blue, silica-filled therapeutic waters, before reaching the airport and returning home.

The Reykjavik Konsulat Hotel, a Curio Collection property by Hilton, is where Icelandic history and style meet. Once a 1900's department store operated by Consul Thomsen's family, this charming building has been renovated with modern amenities and nods to Reykjavik’s vibrant culture. It's a quick walk from this centrally located hotel to Iceland Parliament, Harpa Concert Hall, Laugavegur shopping street, top restaurants and nightlife. Indulge in the spa, featuring an original 19th-century stone wall that reflects Iceland’s tradition of natural bathing. An award-winning chef is at the helm of the hotel restaurant and bar, open all day, and the fitness center has everything you need for a full-body workout.

Sampling local cuisine can be one of the most memorable parts of a trip. Iceladn does indeed have some memorable food to sample from Whale to Horse. Housed inside the old Zimsen house, a former store that was built in the 19th century, the Fish Company's interior is both glamorous and cozy, with an old rocking chair sitting comfortably next to the light shifting bar, a centre of elegant cuisine to dine in Reykjavik.

Drive along the south shore with its black sand beaches and the picturesque waterfalls Skogafoss and Seljalandsfoss. Join an easy glacier walk on crampons up on to the ice field of Solheimajokull glacier tounge, where a wonderland of ice sculptures, ridges and deep crevasses await your discovery. The duration of the tour is 10 to 12 hours.

If you only take one guided tour while you are in Iceland, then it has to be the Golden Circle. Combining natural and historical wonders, you'll experience Iceland's landmark attractions in one incredible day: the magnificent Gullfoss waterfall, the exploding hot springs of Geysir, and Thingvellir national park, site of the Viking parliament and over 1000 years of history. A classic tour, not to be missed! The duration of the tour is 8 hours.

This incredible tour gives you the opportunity to descend inside the magmatic chamber of a dormant Icelandic volcano. Thrihnukagigur volcano lies in the Blafjoll Mountains, just a 30 minutes' drive from Reykjavik. Once you reach the Blafjoll Mountains' cabin, you'll leave your transportation behind and begin an easy and very scenic hike through the lava fields to reach the opening of the crater (approx. 40 minutes). At the basecamp you will be divided in smaller groups of 4-5 people. This is the maximum number allowed on the open elevator that will lift you inside the magma chamber of the dormant volcano. The descent is approx. 120m/400ft long and takes approx. 7-8 minutes each way. Once at the base, you will spend approximately 30 minutes on the ground in the magma chamber. If you are more than 5 people, don't worry, you can wait for your turn while enjoying a tasty bowl of traditional Icelandic meat soup, as well as hot coffee/tea/chocolate, offered free of charge at the nearby basecamp close to the crater's opening.

During your Cheers to Reykjavik experience you will sample six different ales, all paired with traditional Icelandic cuisine, served Tapas-style. In addition to tasting the freshest fish available - caught from the pier just outside the restaurant – you’ll also sample free-range Icelandic lamb, a local delicacy. Your host will introduce each beer and course combo while sharing stories about how the locals have managed to survive on this challenging island through the ages, though your host will happily discuss anything under the arctic sun. An excellent option for guests seeking an introduction to Reykjavik’s relatively unknown though surprisingly impressive food and beer scene, this two-hour experience is limited to guests aged 20-years or better. Cheers!

This non-guided airport transfer with a stop at the Blue Lagoon is ideal for departing passengers in order to maximize their time in Iceland. The lagoon's warm geothermal water and natural active ingredients; mineral salts, silica and blue green algae help you relax and unwind while the lagoon's distinctive white silica mud gently cleanses and exfoliates the skin. The mineral salts balance and relax body and soul.