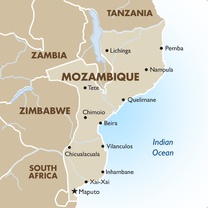 Our Mozambique Tours and Trips

Ever evolving Mozambique offers outstanding beaches along its 2500 kilometres/1500 miles of coastline with excellent diving and a string of small islands dotted around it including Bazaruto and Benguerra. This string of small islands forms a Marine National Park and its coral reefs are teeming with tropical fish making these islands a huge magnet for scuba divers and snorkelers travelling on a Mozambique vacation.

The capital, Maputo is an attractive port retaining much of its Portuguese charm. The old town is a maze of narrow streets with many buildings belonging to its Portuguese colonial past. Here, one can buy exotic spices, nuts and curios at the many colourful markets. There are excellent hotels, restaurants, and an exciting nightlife to be experienced as well as a range of Maputo city tours.

Islands of Benguerra and Bazaruto

The small islands mentioned include Benguerra and Bazaruto which have become a haven for visitors who fly there to enjoy the unspoiled beauty, adding to their Mozambique vacation some of the best snorkelling, diving and big game fishing anywhere. They are also home to some of Mozambique’s most important habitats for marine animals including, among others, East Africa’s last viable population of the endangered dugong, a large marine herbivore. The island group is also home to all five highly endangered marine turtle species of the western Indian Ocean.

Mozambique’s wildlife has been slow to return after the country’s civil war, but two of the most popular conservation areas are Gorongosa National Park and Niassa National Reserve. Gorongosa National Park spreads 370 square kilometres over three districts; Gorongosa, Cheringoma and Muanta in Sofala province. This is the place to head to if interested in viewing wildlife on travel to Mozambique. Lions, leopards, civets, hyenas, buffalo, elephants and hippos among others call the park home. It is considered one of the most important areas of conservation in Mozambique and is recognised throughout the world.

Niassa National Reserve, located in the Niassa province, covers an area of 42,000 square kilometres. It hosts different landscapes including miombo forests, mountain forests, open savannahs and prairies as well as wildlife such as lions, leopards, wild dogs, elephants and buffalos. It is the largest reserve in Mozambique and is home to the largest population of both wild dogs and elephants in the country.

The Quirimbas Archipelago, in northern Mozambique, consists of over 50 coral islands, and has been granted protection status in the form of the Quirimbas National Park. The large park includes world-class fishing and diving locations on travel to Mozambique.

Located on a remote private island in the archipelago is Medjumbe Island, the ultimate in intimate island accommodation for those who wish to experience exclusivity and privacy in a remote tropical location. This pristine island with its breathtaking coral reefs and ocean views is world-renowned for delicious seafood, gracious hospitality and exceptional diving.

Other top cities include Pemba and Vilanculos.

Weather and the best time to visit

Mozambique has a tropical climate with two basic seasons. The wet season is from December to April and the dry season is from May to November. During the wet season, along the coast, the rainfall is heavy and prolonged. So, the best time to visit Mozambique is from May to October when things are cooler and dry. The beaches on both the Bazaruto and Quirimbas archipelagos are wonderful throughout the dry season. For game viewing, August to November are the best months, though Mozambique’s most impressive display of wildlife here is to be found underwater (see below). January and February should be avoided in southern Mozambique as this is the cyclone season.

Why you should visit Mozambique with Goway

At Goway we believe that a well-informed traveller is a safer traveller. With this in mind, we have compiled an easy to navigate travel information section dedicated to travel to Mozambique.

Learn about the history and culture of Mozambique, the must-try food and drink, and what to pack in your suitcase. Read about Mozambique's nature and wildlife, weather and geography, along with 'Country Quickfacts' compiled by our travel experts. Our globetrotting tips, as well as our visa and health information will help ensure you're properly prepared for a safe and enjoyable trip. The only way you could possibly learn more is by embarking on your journey and discovering Mozambique for yourself. Start exploring… book one of our Mozambique vacations today!

After your Mozambique tour, why not consider one of Goway's Europe tours.