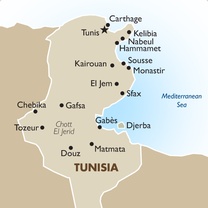 Tunisia combines the old and new on a Tunisia vacation. There are resorts with excellent beaches and first class facilities, archaeological sites dating back to the Phoenicians and desert oases with roaming camels and nomadic tribes. The country has been influenced by the Romans, Arabs, Ottoman Turks and latterly, the French being a French colony for 75 years.

What are the top cities or places to see in Tunisia?

Tunis the capital is the ideal place to see the melting of the old and new. In part, it is ancient with its maze of narrow streets incorporating plenty of souks and mosques but it also has its contemporary influences with modern tree-lined avenues. You can enjoy one of the most impressive medieval medinas in North Africa. With its sprawling maze of ancient streets and alleyways, it is one of Tunisia's outstanding treasures. It contains numerous souks selling everything from shoes to shisha pipes, as well as cafes and back streets full of artisans at work. The Bardo in Tunis is Tunisia’s top museum with its excellent collection of Roman mosaics depicting a fascinating portrait of ancient North African life. Nearby Sidi Bou Said is one of the prettiest places in the country on Tunisia tours with its blue and white houses, cobblestone streets and distinctive architecture, a mix of Ottoman and Spanish styles. It sits on top of a steep cliff overlooking the Mediterranean and offers dramatic views.

Nearby is one of the Mediterranen’s greatest archaeological wonders. Carthage has seen many influences especially from the time of the Roman Empire with its amphitheatre and churches. Situated on a promontory, it has fabulous views of the Mediterranean and the picturesque promenade. There is also a walled citadel and close by is Sidi Bou Said offering sandy beaches and entertainment. Its history dates back to the time of the Phoenicians, an ancient civilization which built cities on the coastline of the Mediterranean from 1550 BC to 300 BC. Unfortunately, the original city was destroyed by the Romans but it was also rebuilt by them and this is what you see today. It was the Roman Empire’s major city in North Africa at the time. The amphitheatre here was rebuilt by Julius Caesar and is used today for summer festivals. You should allow plenty of time to do justice to Carthage on Tunisia tours.

Hammamet is the probably the best-known resort on Tunisia tours and is a popular destination for swimming and water sports such as water skiing, windsurfing and jet skiing. The name Hammamet translates as “Bathing Place” – very appropriate. There are numerous beaches to choose from. Many are private hotel beaches. With its many facilities, you can choose from a full range of accommodation to suit your budget. However, Hammamet offers a lot more than the beach. In the town, you will discover a maze of narrow and winding lanes in the town’s medina (typically a walled city within the city with narrow streets and old houses). This one is surrounded by an original 15th Century wall and contains some well-preserved traditional Tunisian architecture. On a stroll through the medina, you will find many shops and small markets selling embroidery, ceramics, leather goods, carpets and much more. Just outside of Hammamet is Puppet, a Roman archaeological site consisting of aqueducts, cisterns and baths and Nabeul, a colourful town known for its Friday crafts market and which is famous for its ceramics as the inhabitants have been potters since time immemorial.

Sousse is a major beach resort offering excellent beaches, a large selection of hotels and a vibrant nightlife.  Most of the beaches are public with some private hotel beaches. It is one of the older cities in Tunisia with an authentic 9th Century AD medina, a UNESCO World Heritage site. Apart from the usual shopping opportunities, the medina also contains the impressive and vast Great Mosque, a good example of early Islamic architecture. Another major building in the medina is the 8th Century AD ribat (a fortress). From the watchtower, you can have great views of the port and coastline. The Sousse Archaeological Museum is a place to view the excellent collection of mosaics as well as vases, masks, statues and burial tombs. One more attraction is the Catacombs of Sousse believed to be, at one time, the hiding place for Christians during the time of persecution under the Romans. The tunnels stretch for more than 5 kilometres/3 miles and contain around 15,000 graves.

Djerba is an island just off the coast of Tunisia, known as “the island of a thousand palm trees”. It has an excellent stretch of beach containing soft white sand, clear turquoise sea and a good choice of hotels, many of which have their own private beach. After enjoying the resort aspects of Djerba, you can visit the Houmt Souk, the main market town on the island. Here the streets are lined with white-washed buildings with walls covered in bougainvillaea. You can visit the medina with its cobblestone streets and shops selling merchandise such as leather goods, colourful textiles, local ceramics, silver goods and ornate jewellery offered by the many shops. In the evening watch the dramatic sunset – something to behold.

Going back to the traditional, a visit to Kairouan on a Tunisia vacation is rewarding as it is bestowed with numerous mosques including the exquisite Great Mosque. This is where you will find a UNESCO World Heritage-listed Colosseum, the second-largest in the Roman Empire after Rome's. Its seating capacity has been estimated at up to 35,000. It is built entirely of stone blocks with no foundations and has three levels of arcades. The Colosseum is believed to have been built in the 3rd Century AD. You can climb to the upper tiers and explore the underground passageways. The town of Kairouan has many interesting buildings including excellent examples of Islamic architecture in its mosques, minarets and other monuments. It is the 4th holiest city of Islam after Mecca, Medina and Jerusalem. The town is also famous for its quality carpets.

Bustling Sfax is one of Tunisia's major commercial centres and the country's second-largest city. Although it doesn't have the sandy attractions of other Tunisian towns, Sfax is excellent for sightseeing and is a great place to take in local Tunisian culture, with a beautiful walled medina area to explore. It's also a good base for day trips. If you are looking for things to do, the unique architecture of Matmata is easily reached from here, as well as the ancient amphitheatre of El Jem, the most impressive Roman monument in Africa. It was the scene of gladiator displays, chariot races and lions versus humans, often cruel and bloody. It seated around 35, 000 spectators. Only the Colosseum in Rome could seat more.

On a Tunisia vacation, Tozeur is both an oasis and a city found in the southwest of the country. It is a centre for desert tourism and is famous for its many palm trees and the production of dates which have been exported around the world. It was once a Roman outpost and has been ruled by many tribes throughout its long history including the Berbers who have left a lasting impression. The town was also an important stopping point on the trans-Saharan caravan route offering a place to rest before heading further into the desert. Today Tozeur is considered the starting point to the Great Tunisian South because of its easy access to places like Nafta and Chott el-Jerid, the largest of Tunisia’s salt lakes. The best place on a Tunisia vacation to experience the architecture of Tozeur is in the old quarter which hosts the medina, a small maze of brickwork houses.

Douz is a town in the south of Tunisia standing on the northern fringe of the Sahara. It is an incredible palm oasis hosting over 500,000 palm trees and is often considered the “Gateway to the Sahara” due to its easy access to the world-famous desert on a Tunisia vacation. It became an important stop on the trans-Saharan caravan route that used camels to facilitate the trading of gold, ivory, spices and more. The town grew up around the large palm oasis and is surrounded by desert and dry scrubland. Today Douz is known as an important destination for tourists on a Tunisia vacation who are interested in exploring the Sahara and is a starting point for camel, motorcycles or four-wheel drive safaris. It is also home to the Museum of the Sahara which highlights the traditional nomadic lifestyle of the Mrazig people who were some of the original inhabitants of the region.

For the best time to visit Tunisia click here.

The Seven Natural Wonders of Africa

Morocco and Tunisia: Essentials of a North Africa Vacation