Finland is in Northern Europe and borders with Russia to the east, Norway to the north and Sweden to the west. The country is a thoroughly modern welfare state with well-planned and comfortable small towns and cities. Just as important are the vast areas of unspoiled nature to be visited on Finland vacations. Finland has approximately 188,000 lakes (about 10% of the country) and a similar number of islands. In the northernmost part of the country, the Northern Lights can be seen in the winter and the Midnight Sun in the summer. Finns also claim the mythical home of Santa Claus and a large tourist industry in Lapland caters to Santa fans.

Finland is technically not a part of Scandinavia. Even Finns rarely bother to make the distinction, but a more correct term that includes Finland is the "Nordic countries" However, Swedish, is one of the two official languages of the country. Finland has a 5.5% Swedish-speaking minority and is officially a bilingual country, so maps nearly always bear both Finnish and Swedish names. For example, Turku and Abo are the same city, even though the names differ totally. 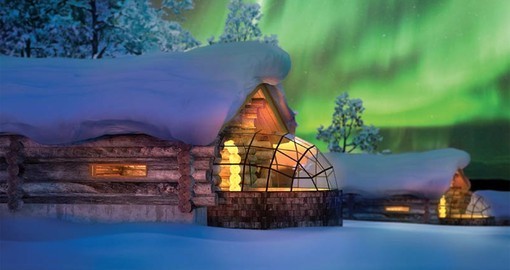 Despite living in one of the most technologically developed countries in the world, Finns love to head to their summer cottages in the warmer months to enjoy all manner of relaxing pastimes including sauna, swimming, fishing and barbecuing. Today, Finland has its own distinctive language and culture that sets it apart from the rest of Nordic Europe.

Finland is technically not a part of Scandinavia. Even Finns rarely bother to make the distinction, but a more correct term that includes Finland is the "Nordic countries" However, Swedish, is one of the two official languages of the country. Finland has a 5.5% Swedish-speaking minority and is officially a bilingual country, so maps nearly always bear both Finnish and Swedish names. For example, Turku and Abo are the same city, even though the names differ totally.

What are the top cities or places to visit in Finland?

Helsinki is the city by the sea on Finland vacations. It has a beautiful harbour around which the city is built. A lively fruit and vegetable market takes place every morning. Esplanadi is the heart of the city, a wide boulevard with many cafes and a lovely park. Senate Square is a showcase of neo-classical architecture which includes Helsinki Cathedral, the Government Palace and the University of Helsinki. The amazing and contemporary Temppeliaukio Church is built into a rock and is basically underground. The interestingly architecturally designed Finlandia Hall is the main concert and exhibition venue. The Sibelius Monument is a fascinating homage to Finland’s famous composer, Jean Sibelius. It is a work of art resembling organ pipes welded together. Suomenlinna is a number of small islands connected by bridges located in Helsinki Harbour and reached by ferry. It is a UNESCO World Heritage site. It is the site of a fortress originally built in the mid 18th Century to protect the city. Today, there are several museums only open in the summer within the imposing fortress walls which detail the history of the fortress as well as Finland’s only remaining World War ll submarine. Seurassari is another island just outside of Helsinki which is an open-air museum with a collection of more than 80 historic wooden buildings acquired from different parts of Finland. These include everything from mansions to churches giving you the opportunity to view Finnish life from the 18th to the 20th Century. Tours are available with guides dressed in traditional Finnish costumes from June to August. There are also demonstrations of folk dancing and handicrafts. An added feature on Finland vacations is the ability to stroll around the picturesque wooded island.

Turku, Finland’s third-largest city is considered the oldest city in Finland, although it was badly damaged in the Great Fire of Turku in 1827. It was the most important city in the country until Helsinki became the capital in 1812. It is of significant interest to visitors on Finland vacations due to its historical aspects and the natural beauty of its setting. It has a distinct mediaeval flavour about it as seen in its market square, its riverfront, its cobblestone streets, cathedral and castle. The riverfront comes alive in summer when people come to eat and drink and listen to music. Turku Castle is the largest surviving mediaeval building in Finland and dates back to 1280.  It has two dungeons, ornate banquet halls and a historical museum. Turku Cathedral is one of Finland's most important cathedrals and considered to be the most important religious building in the country. I

Porvoo is Finland’s second-oldest town with much history. Its picturesque town centre has many wooden houses, gardens, boutiques and cobbled streets plus pleasant restaurants and cafes. The Porvoo Old Town is known for its well-preserved 18th and 19th Century buildings and 15th Century cathedral, Away from the river, the cobblestone streets are lined with charming wooden houses of every colour. Visitors to Helsinki can take a day trip to visit Porvoo. The Old Town hosts various events including an annual Christmas market.

Savonlinna is a beautiful and lively city in Eastern Finland situated on Lake Saimaa in Finland’s Lakeland. The area around is perfect for hiking and horseback riding. Around Savonlinna, there are many small attractive villages. At Kerimaki there is the world’s largest wooden church. The Savonlinna Opera Festival is a cultural event famous throughout the world taking place in July and August annually. It is uniquely staged in Olavin

When on Finland vacations, visit Lapland which includes parts of Norway, Sweden, Finland and Russia. The Finnish portion is one of the most important for tourism. Although it covers 30% of the country (the northern part), it only has 3% of the country’s population. Lapland has its own indigenous population called the Sami who have their own language.

Finland will tell you that Rovaniemi in Lapland is where Santa Claus lives. The “official” Santa Claus village is built on the Arctic Circle. The post office here receives over half a million letters each year from children around the world. You can look at a selection of the letters and you can send postcards bearing an “official” Santa Claus stamp.

A very popular pastime in Lapland on Finland vacations is to stay at an Igloo Hotel (or Ice Hotel), where no matter how cold it is outside, you will be warm and comfortable inside, in a sleeping bag made of reindeer skins. There are a number of these establishments in Lapland. These include the Snow Castle in Kemi, the Arctic Snow Hotel 25 kilometres/15 miles from Rovaniemi, the Lainio Snow Village in near Yllas, the Hotel Kakslauttanen in the Saariselka region and the Hetta Snow Castle situated in Vuollikka.

Some of the sights and special phenomena on Finland vacations include the Midnight Sun. Daylight is experienced all summer long as the sun travels in a circle in the sky above Lapland. Due to the extreme latitude, northern parts of Finland experience the famous Midnight Sun near the summer solstice, when (if above the Arctic Circle) the sun never sets during the night and even in southern Finland it never really gets dark. The opposite is the Arctic Night in the winter when the sun never comes up at all in the North. In the South, daylight is limited to a few hours with the sun just barely climbing over the trees before it sets again.

Nothing beats viewing the Aurora Borealis or Northern Lights. Finland is one of the best places on Earth to do this as they appear on more than 200 nights a year in Finnish Lapland. This very special phenomenon is really only seen outside of an urban area.

Helsinki – A Fascinating Baltic City to Be Explored on Finland Tours

Add a Festival to Your European Vacation (Part 2)

Unique Accommodations Around the World

Why a Europe Vacation is an Excellent Winter Travel Plan

Exploring the Cities of Tomorrow: The World’s Coolest Modern Cities

Consider an additional stopover to your Finland vacations at one of Goway's other European destinations. You can choose from a Paris vacation, a London vacation or an Amsterdam vacation. This can be done stopping over en route to or from Finland.

DELUXE | PRIVATE-GUIDED: This 9 day tour starts in the vibrant seaside city of Helsinki where you will spend 2 nights taking in all the city has to offer before heading 150 miles north of the Arctic Circle in Finnish Lapland. Stay 2 nights enjoying the incredible beauty of arctic wilderness before travelling by train from Helsinki to St. Petersburg for the remainder of your vacation. Visit the must-see sights in St Petersburg including Peter and Paul Fortress, St. Isaac's Cathedral, the Hermitage and more!